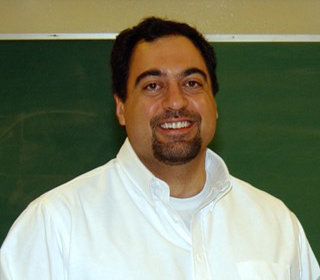 My general areas of interest are marine ecology and ichthyology, and more specifically resource utilization, life history, and fisheries studies of demersal and benthic elasmobranchs (i.e., sharks, skates, and rays) and teleost groundfishes. I am especially interested in trophic ecology and spatial associations of marine fish assemblages, and have several such research projects underway or recently completed between the Bering Sea and Gulf of California. I also have considerable experience in seafloor mapping, collection and analysis of biological and physical data, and trophic and spatial analysis of groundfishes and benthic invertebrates. I enjoy collaborating with colleagues and pursuing interdisciplinary studies. I have especially valued my collaborations with marine geologists, as knowledge of the geologic conditions that create and maintain seafloor habitats for benthic fishes is fundamental to my research.

My academic pursuits spanned several decades, with applied work and research conducted between degrees. I graduated from Dartmouth College in 1992 (B.A., Biology) and Moss Landing Marine Laboratories (MLML) in 2006 (M.S., Marine Science). My M.S. thesis was titled “Fishery biology and feeding ecology of rays from Bahía Almejas, Mexico.” I received an academic fellowship and matriculated at the University of Washington’s School of Aquatic and Fishery Sciences during the fall of 2009 to pursue a Ph.D and graduated in 2015. My dissertation research involved determining spatial associations and trophic relationships of eastern North Pacific skate assemblages to provide baseline information for the development of ecosystems approaches to fisheries management.

I have been active in presenting and publishing my research, and providing expert opinion and written contributions to international conservation efforts. I have authored or co-authored 98 publications (18 peer–reviewed journal articles, 14 book chapters and encyclopedia articles, 23 ICUN Red List Assessments, 25 grey literature documents, and 18 benthic habitat and geological seafloor maps), and have made 96 scientific presentations since 2000. I also have been an invited speaker and moderator at national and international scientific conferences and workshops related to seafloor mapping, fisheries management, and elasmobranch ecology. I am currently a member of the IUCN Shark Specialist Group and the American Elasmobranch Society (AES) Board of Directors. I also served as editor for AES from 2008–2012.

I worked at MLML’s Pacific Shark Research Center (PSRC) as a staff scientist and project manager from its inception in 2002 until its federal funding was terminated in 2009. In addition to publishing several manuscripts and delivering presentations at national and international scientific meetings and workshops, I mentored six PSRC M.S. students and an M.S. student from the University of Brest, France on theses involving trophic relationships and/or spatial associations of sharks and skates. In this capacity, I led weekly instructional meetings on data collection, statistical analysis, and manuscript preparation. All students have graduated and have published their work or have manuscripts in preparation.

I have undertaken habitat-themed employment throughout my career, performing contract and grant-related work that is mainly aimed at mapping the seafloor for associated habitat studies of commercially important groundfishes and invertebrates. I worked at MLML’s Center for Habitat Studies from 1997 to 2004, where I served as manager of more than 20 private and publicly-funded projects related to seafloor mapping and the identification, enumeration, and spatial analysis of groundfishes and structure-forming marine invertebrates from video (manned submersible, ROV) data. I am an experienced submersible diver and have participated in six submersible research projects in collaboration with the CA Sea Grant program, National Fish and Wildlife Foundation, Monterey Bay National Marine Sanctuary, NMFS Alaska Fisheries Science Center and Southwest Fisheries Science Center, and Alaska Department of Fish and Game. I was Co-PI for two of these submersible surveys and have logged over 40 hours of bottom time and 300 days of sea time. My recent work has focused on three main areas: 1) working as a consultant for NMFS to produce reports and GIS products that were necessary for the Essential Fish Habitat Review Committee, 2) determining habitat associations and modeling distribution and abundance patterns of Pacific sand lance, and 3) determining and comparing spatial associations of eastern North Pacific skate assemblages. In 2015, I became a Research Affiliate of MLML and returned to the Center for Habitat Studies, where I currently conduct research and manage projects that integrate seafloor geology and fish ecology.

In late 2015, I accepted a full-time position as a Postdoctoral Fellow with Mary Yoklavich’s Habitat Ecology Team at the Fisheries Ecology Division of the National Marine Fisheries (NMFS), Southwest Fisheries Science Center, in Santa Cruz, in coordination UCSC’s Marine Sciences Institute. My post-doctoral research directly addresses priority needs that were identified during the recent 5-year NMFS review of essential fish habitat for Pacific Coast groundfishes, in which I participated. One completed project provided standardized diet composition, trophic levels, and foraging habitat information for 18 species Pacific Coast groundfishes and established a new measure (“Major Prey Index”) that can be used to identify and rank important prey taxa for groups of fishes. The resulting manuscript is awaiting publication in a special issue of Environmental Biology on Fishes on food habit studies. Current, ongoing research projects involve restructuring NMFS’ Habitat Use Database and expanding its capabilities to make it more useful for stock assessment, and continuing our research on comparative trophic ecology of Pacific Coast groundfishes to include several more species and variables.