Feldspars: Feldspars are the most abundant minerals in the Earth’s crust. This group of silicate minerals is somewhat hard (6-6.5 on Moh’s hardness scale), is often pink, white, or grey in color, and has two good cleavage planes that meet at nearly a 90° angle (figure 1). There are two main types of feldspar, potassium (KAlSi3O8) and plagioclase (NaAlSi3O8 or CaAl2Si2O8). Plagioclase is further divided by the relative amount of sodium and calcium within the mineral. Figure 2 and 3 shows SEM images of these minerals within beach sand.

The EDX elemental spectrum for each mineral shows the abundance of various elements detected, the main tool used to identify these grains. In EDX analysis, inner shell electrons of atoms composing the mineral are excited and ejected. Outer shell electrons replace these ejected electrons to maintain stability, releasing specific amounts of x-ray energy corresponding with a particular element. This energy is shown on the x-axis of the EDX elemental spectrum. The minerals in figures 2 and 3 both contain peaks of silicon. Notice how the peaks align at the same energy level for both minerals, about 1.74 keV. The y-axis represents the counts of each element—the higher the count, the more abundant that element is within the mineral. However, peaks of gold can be disregarded since the sample was coated with gold. The mineral in figure 2 was identified as potassium feldspar due to peaks in silicon, aluminum, and potassium.

The counts suggest that silicon is about three times more abundant than aluminum and potassium, matching its chemical formula, KAlSi3O8. The mineral in figure 3 was identified as plagioclase feldspar due to the presence of silicon, sodium, calcium, and aluminum at abundances matching its chemical formula, NaAlSi3O8 or CaAl2Si2O8. Often plagioclase feldspar is referred to on a spectrum from sodium-rich to calcium-rich. Our specimen falls somewhere in the middle, with almost equal parts sodium and calcium. Morphologically, the grain of plagioclase feldspar displays the classic cleavage often associated with feldspars, with the flat surface on top. 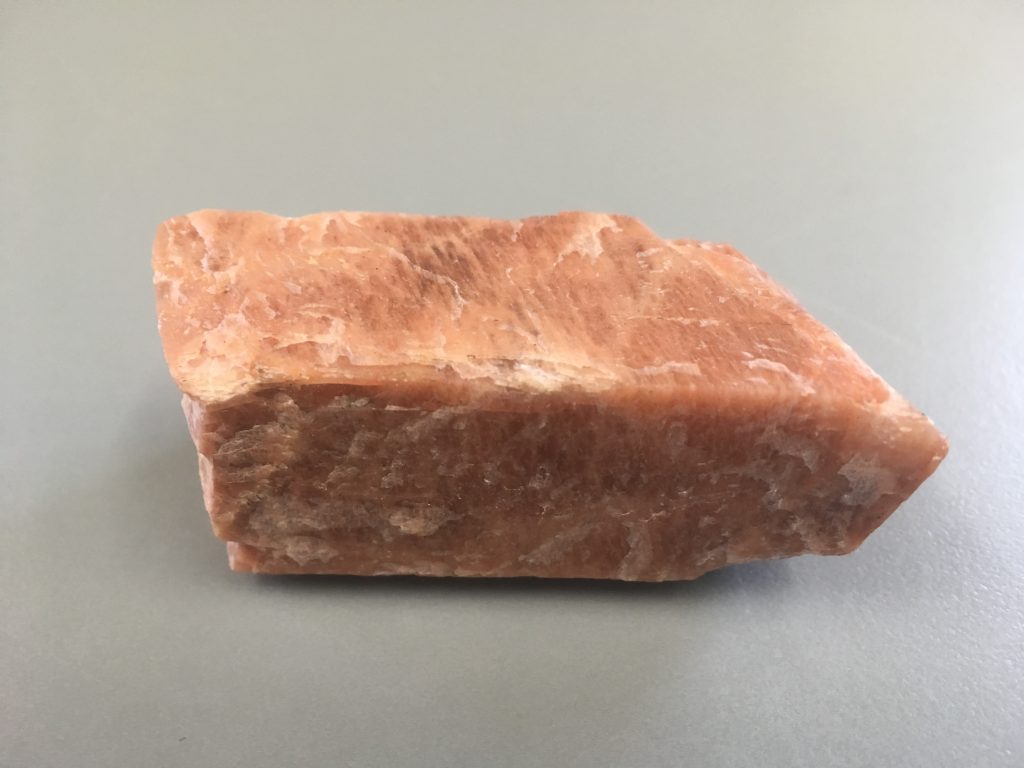 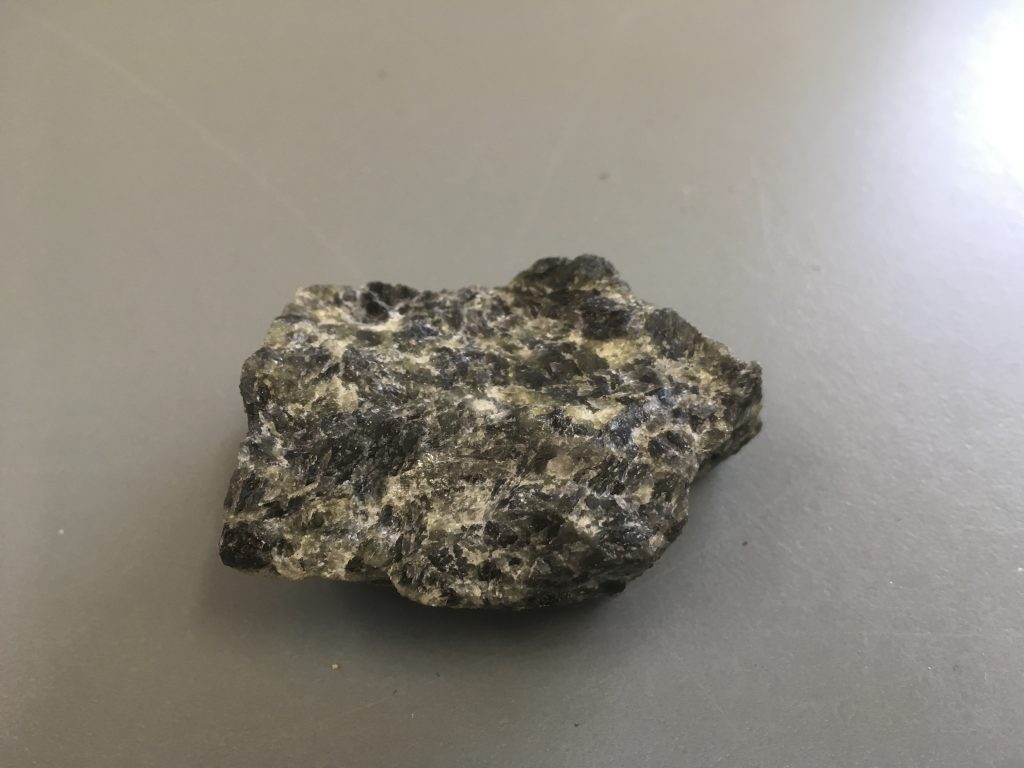 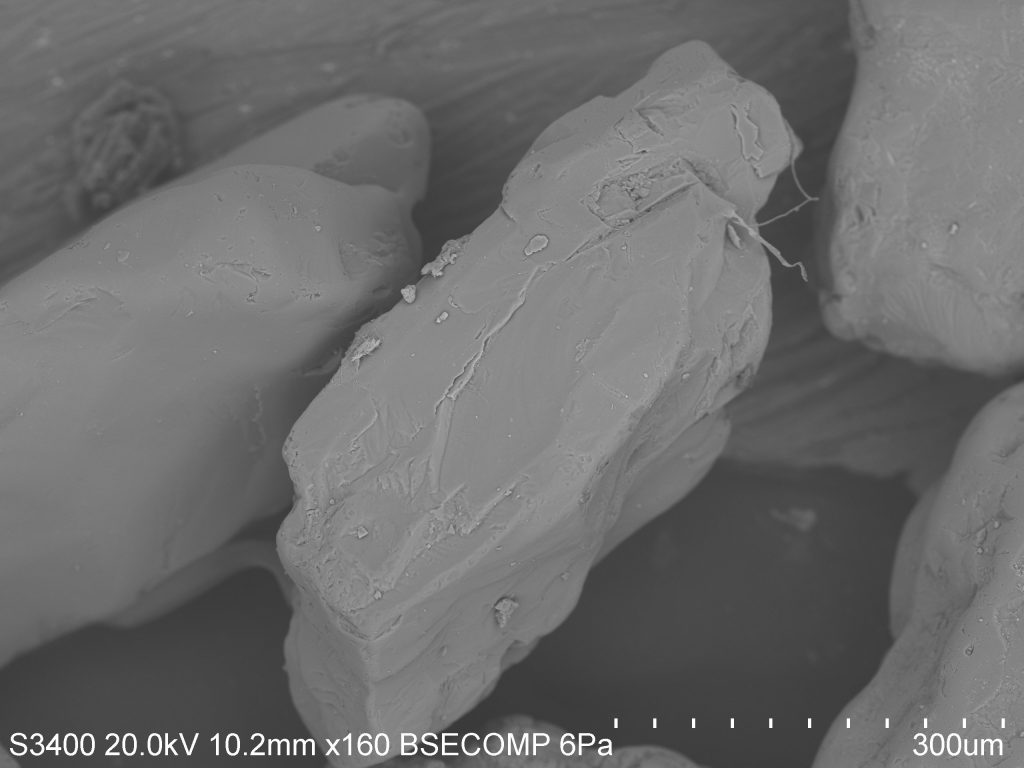 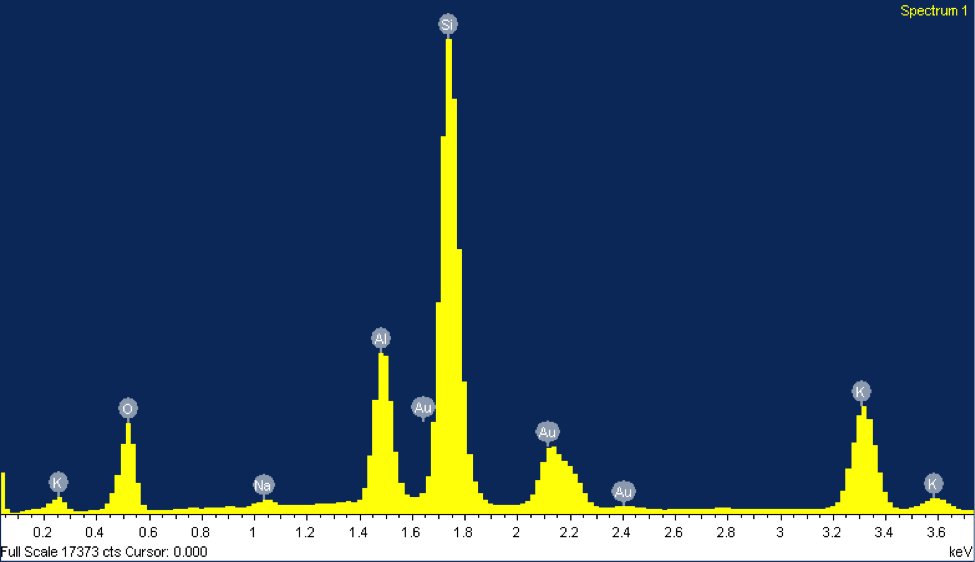 Figure 2: (Right) A SEM image of a grain of potassium feldspar from beach sand collected at Moss Landing Beach. (Left) The EDX elemental spectrum from the feldspar grain. 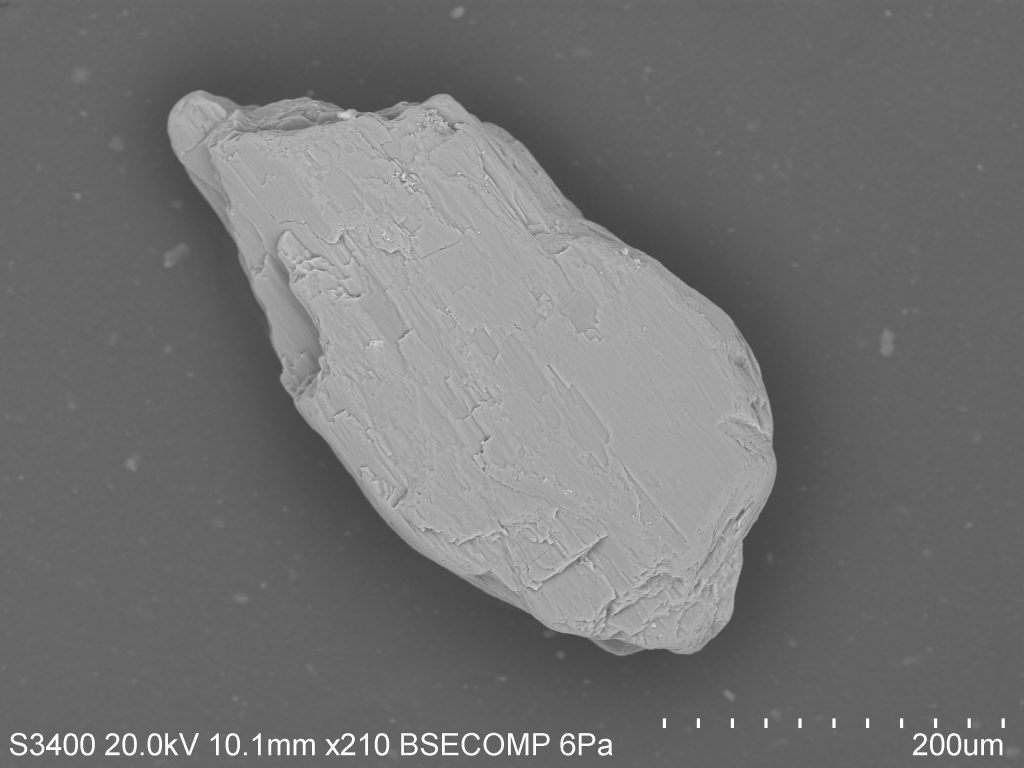 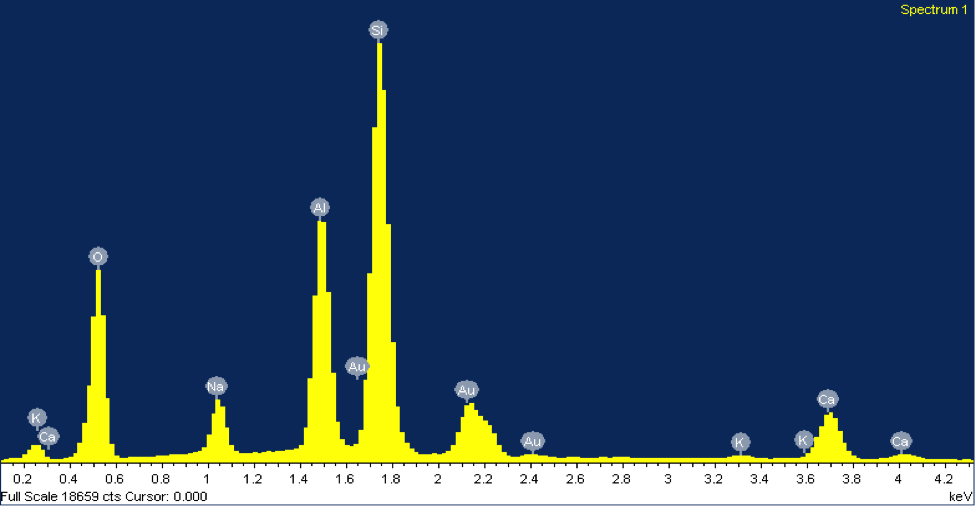 Figure 3: (Right) A SEM image of a grain of plagioclase feldspar from beach sand collected at Moss Landing Beach. (Left) The EDX elemental spectrum from the feldspar grain.

Mica: Biotite mica is a magnesium and iron rich mineral, usually black in color and quite soft (2.5-3 on Moh’s hardness scale). Biotite shares many properties with the potassium-rich muscovite mica, which is usually much lighter in color due to a lack of magnesium/iron (figure 4). The most prominent of these properties is the sheet-like formation of micas (one sheet is about 0.003-0.1 millimeters thick). Figure 5 shows an SEM image of a grain of biotite from beach sand collected at Moss Landing Beach. When I first came upon this grain under the SEM I knew that it was mica, due to its sheet-like form and good cleavage in one direction. However, from the SEM image there is no way of knowing whether it is muscovite or biotite—so I turn to the EDX. The EDX elemental spectrum (figure 5) clearly shows a significant presence of magnesium and iron, indicating that this grain is biotite mica. 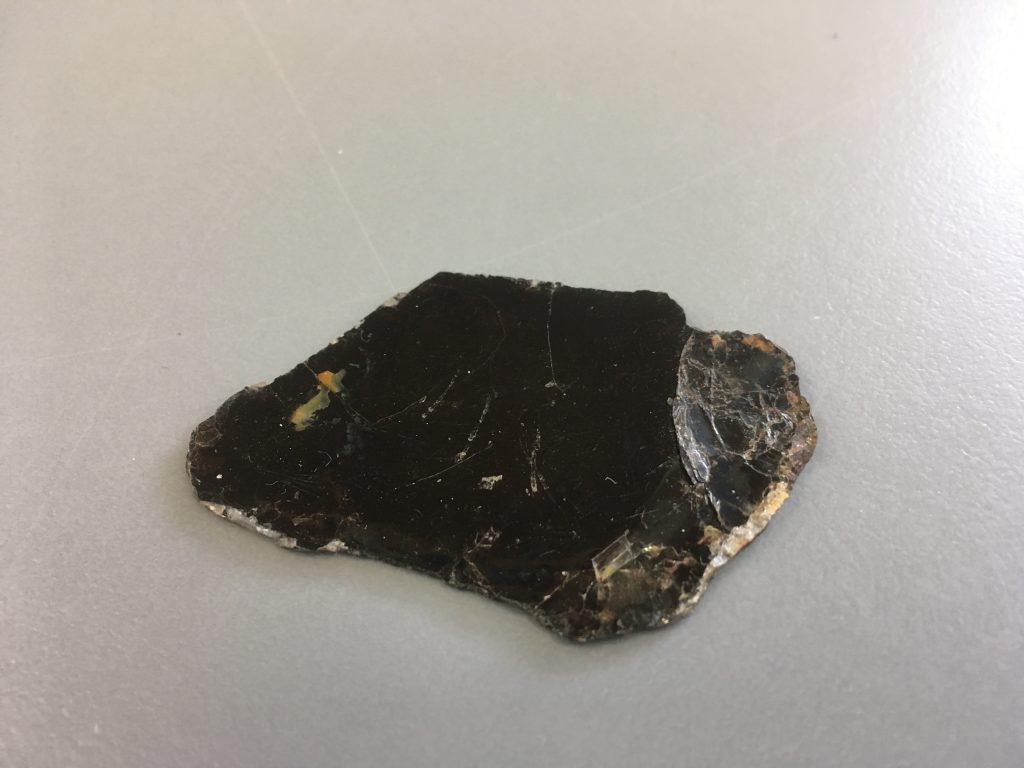 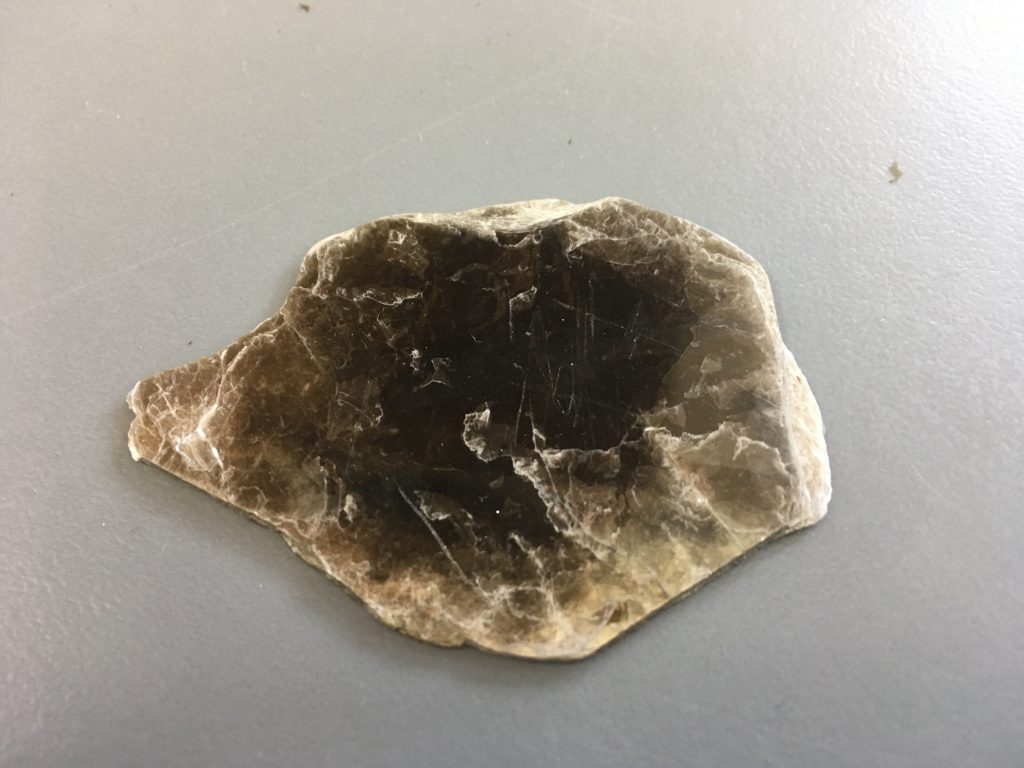 Figure 4: (Right) Biotite mica and (left) muscovite mica. The color difference in these two similar minerals is due to the presence of magnesium/iron in biotite. Notice the sheet-like form of both minerals. 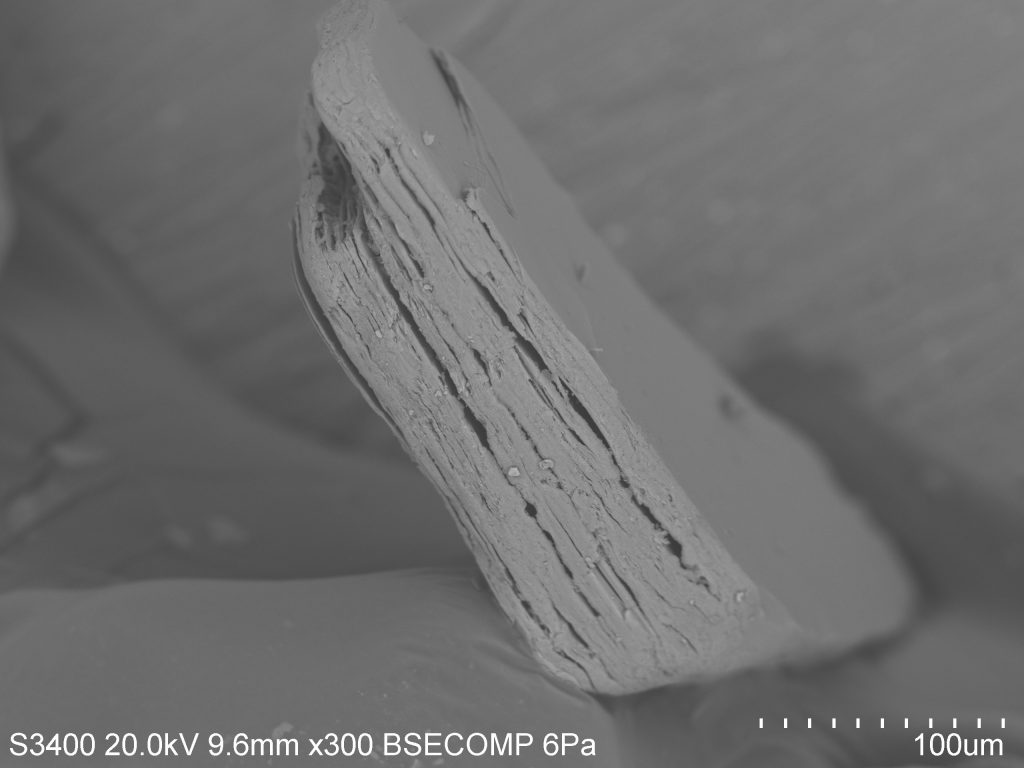 Quartz is one of the most common minerals within beach sand, and often serves as an indicator of weathering and erosion depending upon abundance and surface textures. The general public likely associates quartz with large transparent crystals (figure 1, left). Geologists often think of quartz as a common mineral within dikes, or a body of rocks/minerals that form in the pre-existing fractures of rock (figure 1, middle). On the other hand, sedimentologists are prone to thinking of quartz as semi-transparent and weather-resistant grains (figure 1, right). 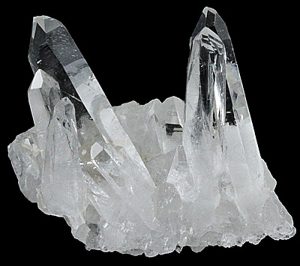 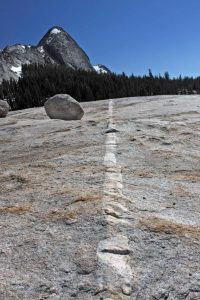 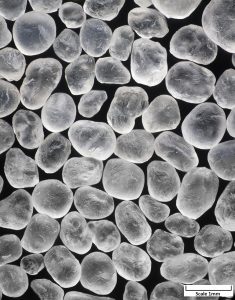 Quartz grains within sand must be identified before assessing weathering and erosional parameters. Figure 2 shows an SEM image of a sand sample from Moss Landing Beach at 55x magnification. To the untrained eye, distinguishing a quartz grain from feldspar, mica, magnetite, or other minerals may seem daunting. Many clues used to identify minerals, such as color, luster, streak, and hardness, cannot be employed here. But after a bit of searching, the grain in figure 3 appears promising due to a lack of both cleavage planes and large pits. 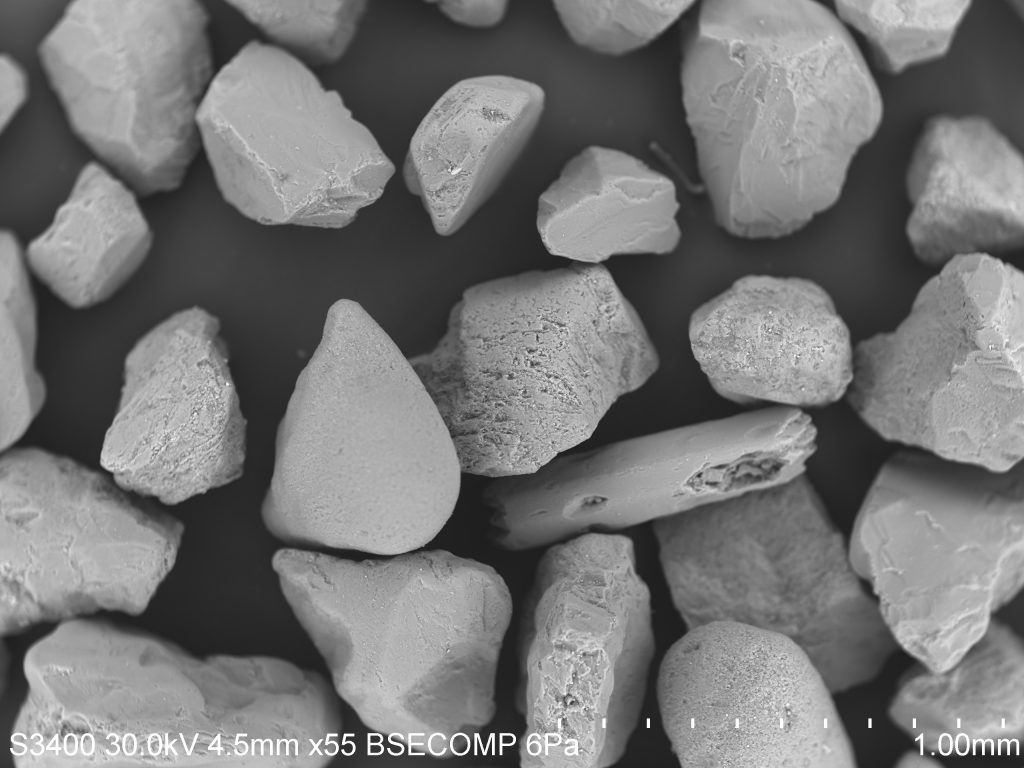 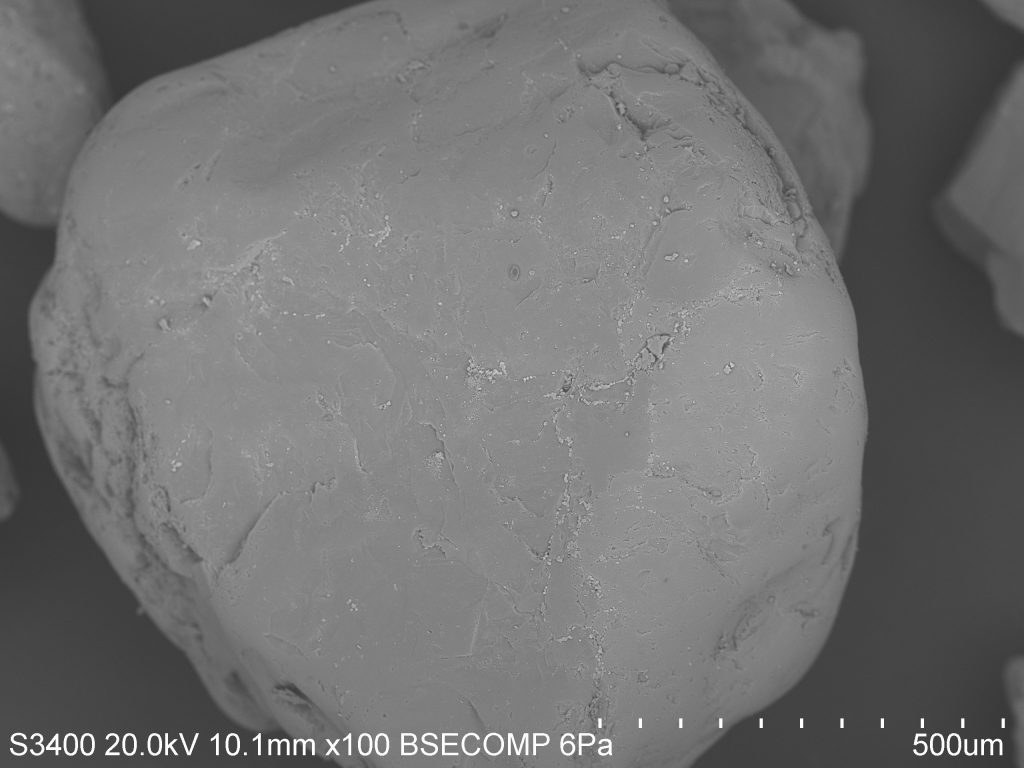 Determining the elemental composition may help to confirm that the grain in figure 3 is quartz. Luckily, the SEM has an energy-dispersive x-ray spectrometer (EDX) that characterizes elemental composition. After only a few minutes of calibration and analysis the EDX provides results, suggesting that a point in the middle of the grain is 33.33% silicon and 66.67% oxygen. This supports the hypothesis that it is a quartz grain, given that the composition of quartz is SiO2.