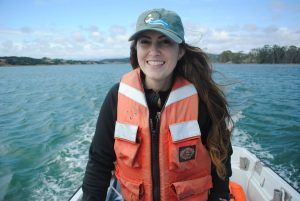 Lindsay received her undergraduate degree at California State University Northridge in 2011. While at CSUN, she spent a semester doing research with the Wrigley Institute of Environmental Science on Santa Catalina Island, and she also volunteered in the Carpenter Phycology lab.

Lindsay joined the Phycology lab in 2013, and is currently working on her thesis project that studies the effects of biomass loss on the seasonal variability in storage compounds of Pterygophora californica. While at Moss Landing, Lindsay has acquired her scientific dive certification, gone on two research trips to Baja California Sur studying rhodolith beds as a living substrate, and participated in a subtidal study of Pterygophora californica population demographics and aging in Stillwater Cove, Carmel Bay.