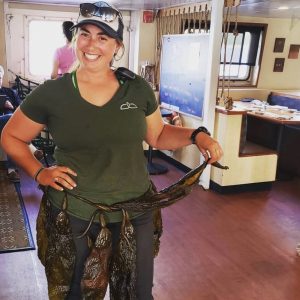 Originally from Virginia, Shelby graduated from Allegheny College in 2013. While in undergrad, Shelby spent a semester abroad studying marine ecology and conservation and became Sci Dive certified in Bonaire, Dutch Caribbean. She also spent a semester doing a SCUBA research project on behavior of diseased ocean surgeonfish. She had internships at MarineLab in Key Largo, FL, and at the National Aquarium. Her undergraduate thesis studied feeding morphologies of two species of darter fish.

Shelby joined the phycology lab in 2018, and her research focuses on the role of Ulva biofilm in the cycling of mercury through coastal ecosystems. She is interested in understanding how mercury and other metals enter the food web and the importance of macroalgae in their bioaccumulation and biomagnification.