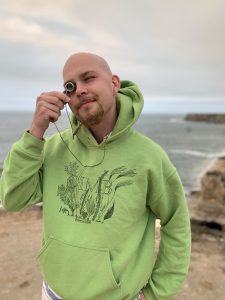 Jackson recently graduated from the University of Oregon in 2020 with a B.S. in Marine Biology. During that time he studied at the Oregon Institute of Marine Biology and conducted a survey of native and introduced hydroids in Coos Bay, Oregon. Jackson is fascinated by the ever more frequent movements and invasions of marine invertebrate species around the globe and their growing impact on the communities they establish themselves in. His current interest is the effects of nonnative species in the Elkhorn Slough next to MLML. During his free time he can often be found listening to podcasts or music while drawing marine organisms.